The Dangs: How a remote part of Gujarat has suffered over 200 years on forest rights

by English Bulletin
in Environment
0

Having suffered under both, the British and post-independence governments, even the Forest Rights Act 2006 has been partially and messily implemented in the Dangs

Residents of the Dangs, like in many forested parts of India, have had to struggle to assert community rights over natural resources. What started during the British occupation of India has continued to the present day.

A cluster of thickly forested hills in the northern tip of the Sahyadri mountain range, the Dangs district is located in southern Gujarat near Surat.

Teak (locally known as Sagwan) and bamboo dominate its landscape, contributing to the political economy of the region. According to local legend, the ‘Dangs’ got its name from the term ‘Dandak-aranya’ meaning ‘bamboo forest’ used in Hindu scriptures such as the Ramayana.

The region is also rich in biodiversity. Early accounts show that the British tried to capture the area on several occasions, until 1842 when they were successful in signing a lease agreement with the tribal kings (or leaders) to claim teak.

Dangi (common identity for tribal communities living in the Dangs) people are still largely dependent on the forest for their sustenance as well as livelihood.

When the farming yield is low, foraging, hunting and fishing in the forest at different times of the year support the survival of the community.

The Kolcha and Kathodi tribes (totalling 40-50 households) are on the verge of giving up on the livelihood of coal making. 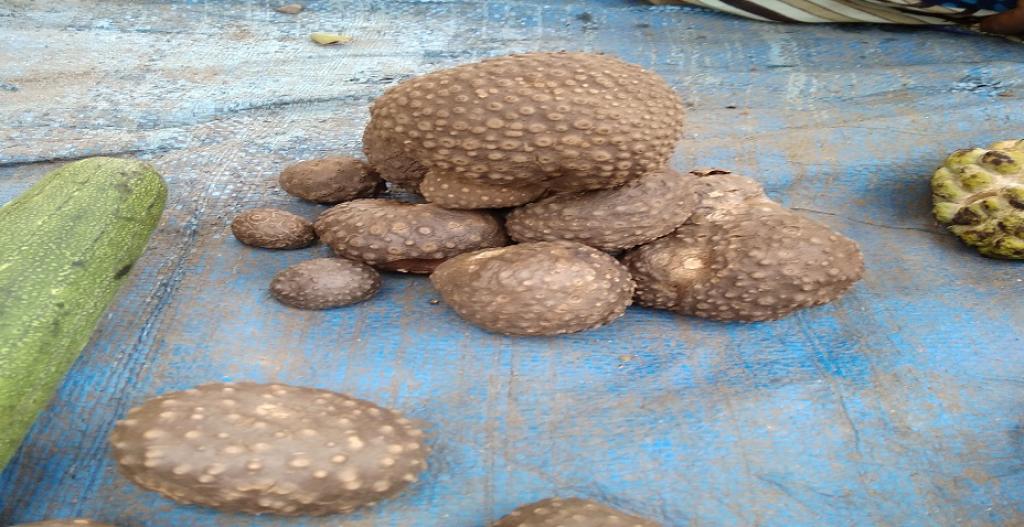 Leftover tubers are sold after family use. Photo: Kanakana Trivedi

The British started the process of demarcation of the Dangs forests into ‘reserve’ and ‘protected forest’ in the 1880s. In 1902, a third of the Dangs area was set aside as ‘Reserve Forest’ that increased subsequently.

A central team in 1954 visited the area to assess the forests and published an unambiguous statement that this demarcation process was undemocratic and illegal (according to Section 4-20 of the Indian Forest Act, 1927).

But the team added a rider: Demarcation should not be done until and unless somebody challenged it in court. Later, the last demarcation was done in 1973 by the Indian government — with the Bormar forest in Dongiamba village being categorised as reserve category.

The decades after independence did not change anything in favour of the Dangis. By the late 19th century, extraction of timber from the forests had started and still continues, resulting in the expansion of reserve forest while also severely restricting the availability of land for cultivation.

By 1987, only 53,994 hectares of cultivable area was available for tribal communities. To date, the same demarcated boundaries stand, setting a classical example of prevailing historical injustice.

Unrest in the hills

There have been episodes of community resistance to the forest bureaucracy, with 14 uprisings so far in the district, during and after the British Raj.

These environmental movements were interlinked with questions of human rights, ethnicity and distributive justice.

There have been attempts to right these wrongs through the implementation of The Scheduled Tribes and Other Traditional Forest Dwellers (Recognition of Forest Rights) Act, 2006, also known as the Forest Rights Act 2006 [FRA 2006] in the region.

There has also been individual resistance against the forest department’s atrocities and attempted evictions until the 1990s.

The year 1973 saw some mass resistance by locals, with the formation of a reserve forest in the Bormar village. But such resistance was spontaneous and sporadic and didn’t sustain.

Tribals had started organising themselves in 1989 against the forest department with the help of a few young activists from the community and outside, holding rallies, etc.

During the course of this struggle, Taraben Pawar, a Bhil woman from Kosimda village (understood as ‘sanghtanao ka gaon’ by the forest department) was shot dead by the officials in November 1991 to teach everyone a lesson for resisting the local officials.

Subsequently, mass repression was unleashed on the tribals of the Dangs. Many were beaten severely, villages were raided, properties were seized and women were harassed.

Hundreds of villagers were framed under false charges and were jailed. Two of the leading activists, Veersingh Patel and Irfan Ali Engineer were arrested under the National Security Act in 1992.

A year later, the Gujarat High Court passed a stay order to keep the forest department from interfering in the cultivation of forest land belonging to 314 adivasis from nearly 20 adivasi villages.

The stay order continued till 2006 after the enactment of FRA 2006, when the original petition was withdrawn. However, minor incidents of persecution and eviction attempts were still prevailing even after the passing of the stay order, but not on the same scale as it was earlier.

A messy recognition of rights

The implementation of FRA 2006 began in 2008-09 in the state, with the formation of the first Special Gram Sabha (SGS). The sole agenda was to constitute the Forest Rights Committee (FRCs) at the village level.

Of 311 villages in the district, to date, 273 have formed FRCs. In the second SGS, Individual Forest Rights and community forest resource (CFR) forms were distributed. According to the Tribal Sub Plan, around 137 CFR claims were filed in 2009 itself.

Communities have been traditionally sourcing tendu leaves, bamboo, mahua, honey, tubers, fruits, medical plants and wood from the forest. A walk into the forest is a daily ritual, sometimes to graze cattle and to farm.

According to locals from Subir taluka, before FRA 2006, access to the forest was heavily restricted.

But some ‘privileges’ were granted in and around the protected areas of the Dangs such as the Purna Wildlife Sanctuary and the Vansda National Park, according to the Gujarat Forest Manual 1975.

However, no privileges were granted in the reserve forest and adivasis working there were regarded as illegal cultivators.

Seventy-six villages have had their CFR recognised since 2016. But there still are issues pertaining to the lack of complete ownership such as:

In the atmosphere of discontent regarding the rightful implementation of the Act, a hopeful enactment of FRA in the Dangs has come about.

The Central Pulp Mill (in Songadh, Gujarat) has been procuring bamboo from nearly 20 gram sabhas after signing a memorandum of understanding in 2017. This year though, due to COVID-19-related circumstances, no agreement has been signed.

The amount accumulated by gram sabhas range from Rs 80,000 to Rs 600,000, but how exactly this fund is to be monitored and used could not be found out yet.

We are a voice to you; you have been a support to us. Together we build journalism that is independent, credible and fearless. You can further help us by making a donation. This will mean a lot for our ability to bring you news, perspectives and analysis from the ground so that we can make change together.

A dead man was found in a Spanish dinosaur statue –

Laverana GmbH | lavera Naturkosmetik is now climate-neutral and is protecting 5,023 ha of rain forest in the Amazon region

After the Megaship blocked the Suez Canal, Evergiven finally arrived in Rotterdam and unloaded the cargo. –

The Fishing limit in the Gaza Strip grows to 12 miles

After the Megaship blocked the Suez Canal, Evergiven finally arrived in Rotterdam and unloaded the cargo. –

The Fishing limit in the Gaza Strip grows to 12 miles

No Result
View All Result