by English Bulletin
in Environment
0

Pollution control bodies of most Indian states shared no or partial information on public hearings of development projects online, a new study found.

There are 34 state pollution control boards (SPCB) and pollution control committees (PCC) in the country that make pollution information public on websites. Of them, those in Arunachal Pradesh, Assam, Manipur, Nagaland, Andaman & Nicobar, Puducherry, Chandigarh, Daman & Diu and Uttar Pradesh did not share any detail of public hearings, according to the report.

The study was conducted the Centre for Science and Environment (CSE), a Delhi-based non-profit that ranked all the state pollution control panels based on transparency in several parameters.

Meghalaya, Andhra Pradesh, Jammu & Kashmir and Sikkim shared executive summaries and draft EIA reports, but not minutes of public hearings, according to the report.

Himachal Pradesh shared minutes of meeting and draft EIA report but didn’t specify the date of the next public hearing.

Haryana, Jharkhand and Tripura shared meeting minutes only of projects for which public hearings are over. Assam pollution control board has shared just the list of public hearings conducted and no other detail on their website, the researchers wrote in the report.

Daman & Diu and Dadra & Nagar Haveli have a common pollution control body and the one in Lakshadweep does not have a website.

Only Karnataka, Telangana, Delhi, Gujarat, Kerala, Punjab, Rajasthan, Goa and Mizoram have put out all the necessary information on public hearings on their websites. 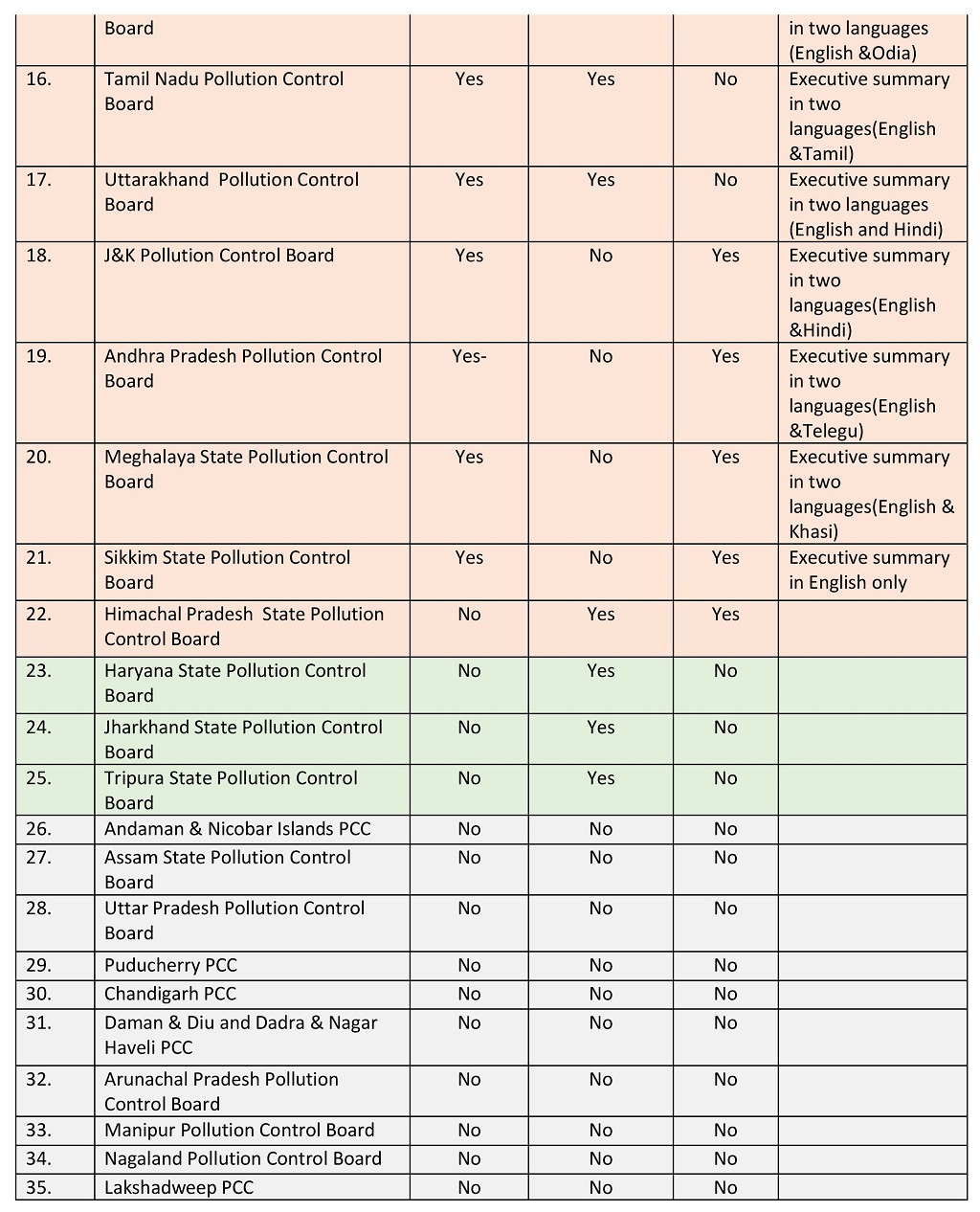 It is perplexing that only nine boards have given detailed information, considering it is their job to conduct a public hearing and put up all the relevant information on their website. Their website is the best medium to source information.

Public hearing is a mandatory step in the process of getting an environmental clearance from the Union Ministry of Environment, Forest and Climate Change for projects under Category ‘A’ in the Schedule.

Projects that fall under Category B are cleared by the state government or the state-level environment impact assessment authority.

The interaction between locals and government officials as well as proponents of upcoming project brings transparency in the environmental clearance system, according to environmental experts.

We are a voice to you; you have been a support to us. Together we build journalism that is independent, credible and fearless. You can further help us by making a donation. This will mean a lot for our ability to bring you news, perspectives and analysis from the ground so that we can make change together.

The AstraZeneca vaccine has a hospitalization rate of only 1.52% and is ideal for keeping people away from the hospital. –

A dead man was found in a Spanish dinosaur statue –

Laverana GmbH | lavera Naturkosmetik is now climate-neutral and is protecting 5,023 ha of rain forest in the Amazon region

No Result
View All Result